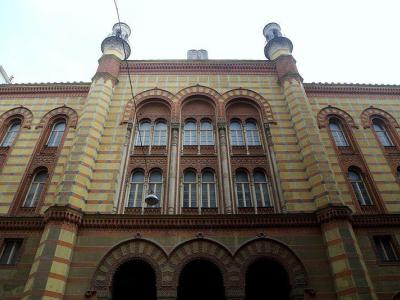 Located in the heart of downtown Budapest, at the historic district of Belvaros, this synagogue has been the spiritual home for Neolog Hungarian Orthodox Jews since the late 19th century. Built to the design of Otto Wagner, the genius behind many Art Nouveau buildings in Vienna, this synagogue has an architectural style clearly reminiscent of the Northern African and Arabic themes, featuring octagonal, minaret-style columns similar to those of Jerusalem's Dome of the Rock.

The decorative brickwork on the outside of the building is quite remarkable, with carved stone and stucco complementing the wrought iron work. The multi-colored facade, along with the oriental style arches, make the perfect backdrop to the windows with the Star of David in them; at the center of the facade, one can also see the two stone tablets of Moses.

The interior of the synagogue is quite stunning too, with a soaring main nave, exquisitely decorated dome and ceilings, stained glass windows, and decorative arabesques on the walls. Suffered badly during World War II, the building has been out of service for almost 60 years now and its restoration is still underway.

The surrounding area is just as reflective of the Jewish culture and history with plenty to see. You can wander around and make a few interesting stops further afield to see the main Budapest synagogue, on Dohány Street, just a few blocks away.
Image by Thaler Tamas on Wikimedia under Creative Commons License.