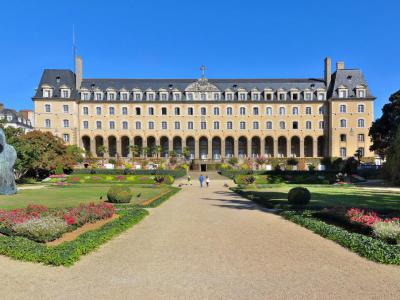 The Saint George Palace is an historic building in the city of Rennes. Formerly an abbey residence, it was built in 1670 to replace a much older abbey building that stood on the same site. The central feature of the building is its long gallery of nineteen two-storey windows and paired nineteen granite arches. The gallery is accessed by a large double staircase with substantial stone balustrade. At either end of the main gallery section are two pavilions in the same style. The mansard roof features twenty-three dormer windows and above the three central windows is a large semi-circular pediment surmounted by a stone cross. The pediment is sculpted with the arms of the abbey, flanked by figures of justice and peace. The coat of arms of the abbess Magdelaine de la Fayette is present in relief on both end pavilions and in the centre of the building between the second- and third-storey windows Her name is featured in the form of iron bars shaped as letters, bolted to the façade, and spaced evenly above the pier of each arch, as MAGDELAINEDLFAYETTE, with the double T joined above one pier. A landscaped formal garden, Jardin Saint-Georges, is situated in front of the building, with gravel paths leading to the main entrance.
Image by P. Danilo Royet on Wikimedia under Creative Commons License.
Sight description based on wikipedia