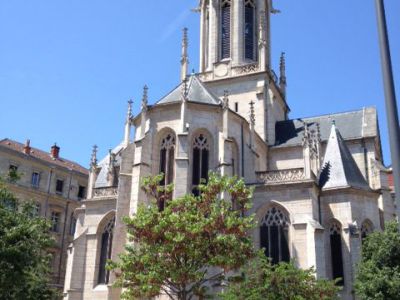 You shouldn’t miss visiting St Georges’ Church which stands on the banks of the Saône in the Vieux Quartier of Lyon.

The first church to stand on this site was built in 550 and destroyed in 732 by invading Saracens. It was rebuilt in 802 and when the Commandery of the Order of Malta was built alongside in 1315, the church was given to the Order.

Like so many churches in France, during the Revolution it was used as a hay barn, to prove that the people needed fodder for their animals more than religion. This was a sort of rude gesture towards the Vatican, whose bishops were considered to be the main corrupters of the monarchy and the nobility.

Luckily, it didn’t follow in the footsteps of other churches that were destroyed during that time, and it was restored in 1869 by Bossan in the Neo-Gothic style. He also made most of the furniture. The facade was sculpted by Dufraine and the stained-glass windows were created by the Marechal de Metz.

In 1892 it was renovated by Pollet and the beautiful steeple on top of the bell-tower was added. The main portal is huge, but the facade facing the river is the best side of the church, with its many arched windows and twin balconies.
Image by Okhee Hyon under Creative Commons License.
Sight description based on wikipedia