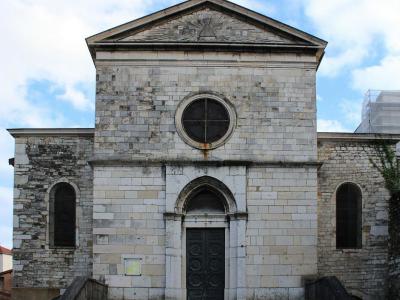 Saint Irénée Church is a very simple building, but it has a long and interesting history and is well worth a visit.

The first church was dedicated to Saint John in the 1st century AD. Irenaeus was born in Asia Minor and became a priest under the first bishop of Lyon. When the bishop, St Pothius, was martyred during an uprising in the city, Irenaeus became bishop in his place.

He was a pious, scholarly man, writing against the Gnostics (an early Christian sect) and arguing about the date of Easter. He died in 202 AD and was buried in St John’s Church. Some Christian scholars say that St Irénée was martyred, but there is no proof of this.

Outside the church you will see the only remaining “Calvary” in a French city. The three crosses, bearing Christ and the two thieves, with the statues of three women at the foot of the cross were created in 1687.

During the French Revolution the church was used as a grain store. It and the crypt were renovated in 1863. Three Roman tombs were uncovered during archaeological digs in 2000 near the church and have been placed in the crypt.
Image by Bocachete on Wikimedia under Creative Commons License.