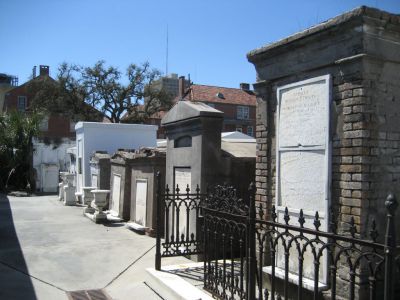 It may seem odd to have a cemetery for tourist attraction, but not for the city like New Orleans, it's not. The above ground resting places are an important part of local history and display an array of beautiful Spanish and French design monuments. Two of the city's most famous cemeteries are Saint Louis Cemetery #1 and #2.

Saint Louis Cemetery #1 was established in 1789, replacing the old Saint Petersburg Cemetery, and is now part of the African American Heritage Trail in the city. It is located eight blocks away from the Mississippi River on Basin Street. The cemetery spans just one square block but is a resting place for many thousands. Numerous notable individuals have been buried here, in the crypts and tombs, including prominent locals like the civil rights activist Homer Plessy, the sugar industry pioneer Etienne de Boré, the architect and surveyor who allegedly became one of Jean Lafitte's pirates Barthelemy Lafon, and one of the earliest world champions of chess Paul Morphy. The renowned Voodoo priestess Marie Laveau is also interred in the Glapion family crypt at this cemetery.

Other notable New Orleanians buried here include Ernest N. "Dutch" Morial, the first African-American mayor of New Orleans, and Bernard de Marigny, the French-Creole aristocrat and politician who founded both the Faubourg Marigny and Mandeville, Louisiana. Delphine LaLaurie, the notoriously cruel slave owner, is also believed to be laid to rest here. In 2010, actor Nicolas Cage purchased a pyramid-shaped tomb to be his future final resting place.

Tip:
It seems like the church has closed the #1 cemetery to self-guided tours due to the unwanted late night ceremonies and vandalism; however, you can book a guided tour, day-side (be sure it is led by a guide with a license to enter the cemetery and not just to talk about it outside the walls). If you're not a fan of guides or tours, try the #2 cemetery, which is free to enter.