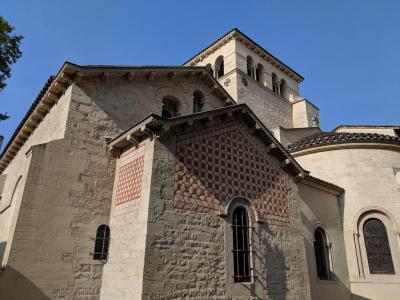 Saint Martin d’Ainay is one of the rare Romanesque churches in Lyon and it has a long and interesting history.

A Benedictine priory was built on this site in 859, and the church was constructed when the priory became an abbey in 1107.

During the Renaissance period the abbey was one of the most powerful in France, having pre-eminence over other abbeys, priories and churches from Bourgogne to Provence. It had its own port, extensive buildings with a cloister and the abbot lived in a palace.

The abbey suffered heavy damage during the War of Religion in 1562: the cloister was razed to the ground and the church all but destroyed. By the end of the 17th century, it was no longer a monastery and the church and buildings were given to a secular chapter in 1685.

In 1780 it became a parish church and lost its status as an abbey. During the Revolution it was used, as were many other churches, as a grain store and the abbot’s palace was destroyed.

You will notice various styles of architecture in the church: the ancient Chapel of Saint Blandine is in the pre-Romanesque style, the main part of the building is Romanesque and the Chapel of Saint Michel is Gothic.

The nave is the most intriguing part of the church, with its 4th century columns, which gives the church an especially ancient look. These columns came from the ruins of a Roman temple and used during the construction of the church.

The nave’s vaulted ceiling and the two side chapels dedicated to St Joseph (on the left side of the nave) and the Virgin (on the right) were constructed in the 19th century.
Image by Bautsch on Wikimedia under Creative Commons License.
Sight description based on wikipedia