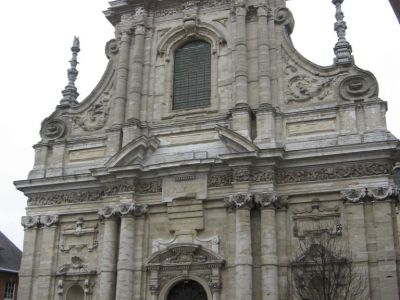 Constructed between 1650 and 1670, the edifice is considered to be the main Jesuit church in Belgium. The building was designed by architect Willem Hesius, who was responsible for the main edifice of this magnificent church. The impressive facade with a Baroque influence is described as an altar outside the church. The Baroque style makes the building really stand out amongst the smaller, secular houses that surround it. The church was founded in 1940 by royal decree, and recognized and protected as a monument.
Image Courtesy of Wikimedia and Michiel1972.

Want to visit this sight? Check out these Self-Guided Walking Tours in Leuven. Alternatively, you can download the mobile app "GPSmyCity: Walks in 1K+ Cities" from iTunes App Store or Google Play. The app turns your mobile device to a personal tour guide and it works offline, so no data plan is needed when traveling abroad.