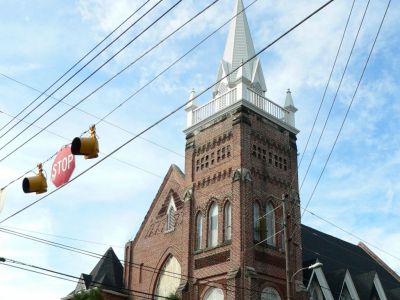 The St. Paul A.M.E. Church is a historic American Gothic Revival style African Methodist Episcopal Church located in Raleigh. A red brick and frame structure built in 1884 by black masons, St. Paul's was the first independent congregation of African Americans in Raleigh and is the oldest African-American church in Wake County. Due to financial strains of its members, construction of the new St. Paul's Church took 25 years to complete. Many Southerners struggled in the essentially rural economy in the quarter century following the American Civil War. Because of earning lower wages in a segregated society, members of the congregation chose to live on bread and molasses to raise enough money to complete the church. In May 1901, the building was completed. The congregation marked the sanctuary’s completion with a joyous two-week revival. Governor Charles B. Aycock delivered a speech when the church finally opened.

Although the majority of the church had been built, construction on the spire did not take place for another eight years. In 1909 an accidental fire consumed most of the building, leaving only the brick walls. Donations from the white community as well as black resulted in reconstruction of the church, including addition of the long-planned spire. The church was listed on the National Register of Historic Places in November 1987 and is also a Raleigh Historic Landmark.
Image Courtesy of Wikimedia and Nicholas Oren Rawlings.
Sight description based on Wikipedia.