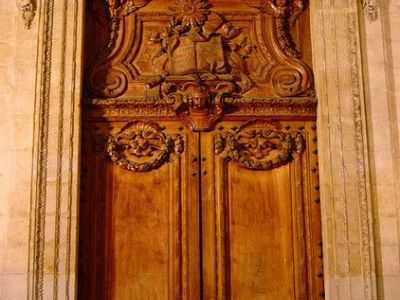 The church of Saint Polycarpe stands on La Croix-Rousse Hill and is a lovely church that is well worth visiting.

It was built in 1670 by the Oratorians, although the facade with its four Corinthian pilasters supporting a triangular pediment was the work of Loyer in 1751. At the same time, the nave was enlarged.

The facade was badly damaged during the Revolution when the quarter was subjected to heavy canon fire. Between 1826 and 1836 the building was repaired and enlarged; the transept, the cupola and the choir were built by Farfoullin.

In the 19th century a large decoration project was undertaken, with some of the best artists in Lyon, putting their hearts into their work to produce the fine statues and furnishings that you can see today.

The marble pulpit is decorated with sculptures created by Dufraine in 1864, and the abat-voix (the canopy over the pulpit) was designed by Bossan.
Image by genevieveromier on Flickr under Creative Commons License.
Sight description based on wikipedia