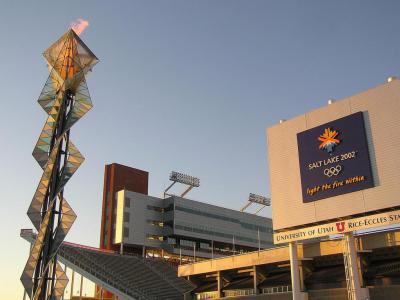 Salt Lake 2002 Olympic Cauldron Park is a plaza located at the south end of Rice-Eccles Stadium on the campus of the University of Utah. Rice-Eccles Stadium was the site of the Opening and Closing ceremonies of the 2002 Olympic Winter Games. The park contains the cauldron that was lit for the duration of the games. Its interior contains a cascading waterfall. The cauldron was moved from the top of the south edge of the stadium to the plaza just south of the stadium. It is still operational and is lit on special occasions, including the opening weekend of the 2006 Winter Olympics in Italy. The cauldron is surrounded by a reflecting pool and cascades. The striking Hoberman Arch was moved from its original location at Olympic Medals Plaza to Olympic Cauldron Park. The arch is lit with various colors at night. The visitor center consists of an art gallery, theater and video viewing area.
Image by Scott Catron on Wikimedia under Creative Commons License.
Sight description based on wikipedia