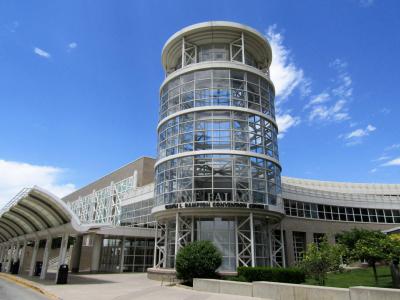 The Calvin L. Rampton Salt Palace Convention Center, more commonly known as the Salt Palace, is a convention center named after Utah's 11th Governor, Calvin L. Rampton. The historic Salt Palace was built in 1899 under the direction of architect Richard Kletting with funding from John Franklin Heath. The original Salt Palace contained a dance hall, theater, and racing track. It was destroyed by fire on August 29, 1910, and was replaced by Majestic Hall. The new Salt Palace was an indoor arena built on land that was once the "Little Tokyo" area of the city. A convention center of the same name stands on the site today. The Salt Palace served as the Olympic Media Center during the 2002 Winter Olympics. The Salt Palace Convention Center is an architectural wonder. The trusses that support the roof were designed by one of the world's foremost roller-coaster designers, Kent Seko.
Image by Streamline1989 on Wikimedia under Creative Commons License.
Sight description based on wikipedia