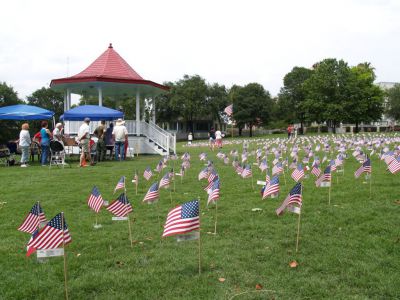 A tranquil green oasis in the thick of Downtown, this is Houston's oldest park, surrounded by old, beautiful oak trees and housing numerous monuments and historic buildings. For tourists and locals alike, it's an excellent place to get a better understanding of how the city looked like during the early years while at the same time absorbing the exceptional panorama of its stunning modern skyline. This clash of old & new is outstanding from a photographer's viewpoint.

The park is friendly and there are organized events hosted by the Heritage Society, the organization that here operates ten historic structures (dating from 1823 to 1905), all destined for destruction as a more modern Houston was evolving. The result is now a treasure trove of several different styles of older housing that would have otherwise been lost forever – including a rustic log cabin (The Old Place, 1823), Houston's oldest brick dwelling (Kellum-Noble House, 1847), the first house in town built with an attached kitchen (Pillot House, 1868), and the first to have electric lights (Staiti House, 1905).

St. John's Church, is still a functioning ministry right in the heart of the park, and from its door the city's skyscrapers are in full view. Other historic buildings now relocated to the park include the Greek Revival-style Nichols-Rice-Cherry House (1850), the Yates House (1870), and the Fourth Ward Cottage, which may predate 1858.

Most people have experienced this park before/after a race or for a beer/wine fest but you should make the most of a gorgeous day and just head on your own for a self-guided walking tour or a picnic – yes, a picnic, while enjoying the sites and the sun, or the occasional tunes and performances. The Heritage Society also has a small museum on the site, which, apart from telling the story of the city's development, operates a "general store" with plenty of things to look at and touch.

Tip:
Make sure to come during the day, as the park does close down after dusk. Entry is free and you can either walk around the outside of the buildings or pay a fee for the museum and tours.