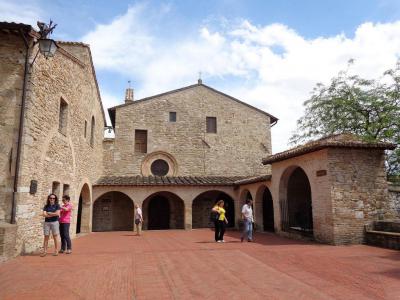 San Damiano was the first monastery of the Order of Saint Clare. It is a church with the appearance of a hut. There is a short portico and three round arcades supported by brick pillars. There is a rose window. The interior has one nave with ogival vaults.

Tradition holds that St Francis, while praying in the church in 1205, heard a voice from the crucifix saying, "Francis, go and repair my church which, as you see, is all in ruins!" Francis at once acted to repair the dilapidated San Damiano Church. It wasn't until later that he realized the church to be repaired was the institution itself.

The crucifix which is thought to have spoken to St Francis is currently hanging in the Basilica of St Clare, in Assisi.

The San Damiano Church was in existence as early as 1030. It was a property of the Benedictine Fathers. How well Francis rebuilt San Damiano Church and the Porziucola is not known. All that is known is that the original church had only one nave and a raised chancel.

The church now has a single nave and apse covered with frescoes of San Damiano, Saint Rufinus, Jesus and the Madonna. There is also a wood choir made in the 14th century. Above the apse is a copy of the crucifix that spoke to St Francis.
Image Courtesy of Wikimedia and Superchilum.