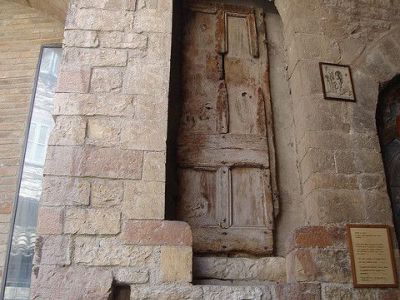 Casa Natale di San Francesco is the original home in which the future Saint Francis of Assisi, prominent Italian deacon and setter of the Italian literary tradition, was born on July 5, 1182.

According to legend, the birthplace of St. Francis was once a stable, housing oxen and donkeys, and it was here that his mother found refuge to give birth. Attesting to this is the inscription above the pointed arch entry. The property was transformed into an oratory and first documented in 1286.

A Romanesque arch, into which a Gothic entry portal is placed, dominates the façade. Upon entering this place of worship, especially after having visited all the other big churches with huge crowds of tourists, one can't help noticing the humble, spartan interior: benches lining the walls, and the traces of 13th-14th century frescoes above the raised altar.

Outside, in a lovely, intimate square there is a modern bronze sculpture of Francesco's parents: father, Pietro di Bernardone dei Moriconi, and a French mother, Pica de Bourlemont. Overlooking the square is an imposing 17th-century Chiesa Nuova (New Church) with a solemn and monumental façade, typical of Renaissance tradition. This church was built in 1615 on the site of the presumed paternal home of St Francis.

Inside, near the first pillar, on the left, you can see the room where Francesco's father, a prosperous silk merchant, is said to have once chained his young rebellious son in a bid to distract him from living as a penitent and dedicated to the poor, and hoping to bring him back to the paternal profession of commerce. Ultimately, Francesco was released by his mother who understood her son's aspiration to the higher values than the selfish quest for wealth pursued by his father.
Image Courtesy of Flickr and Sergio Andrés Madera.