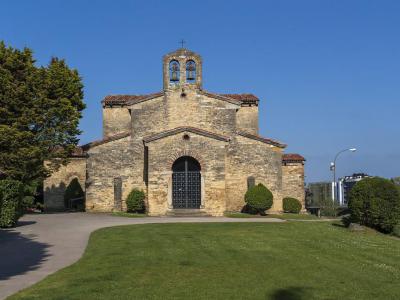 San Julián de los Prados, also known as Santullano, is a Pre-Ramirense church, dating back to the beginning of the 9th century. It is one of the greatest works of Asturian art and was declared a Historic Monument by the Spanish Ministry of Culture in June, 1917 and a World Heritage Site by UNESCO on the 2nd of December, 1998. The church's construction was ordered by Alfonso II of Asturias and it was built by the court architect Tioda around 830. It is dedicated to the martyred Egyptian saints Julian and Basilissa.

The spacious church clearly displays the characteristics of its style. It is of basilica plan with a nave and two aisles separated by square piers which support semi-circular arches and with a transept of impressive height. The iconostasis, that separates the sanctuary from the rest of the church is remarkably similar in appearance to a triumphal arch. The size and originality of the church stands out and distinguishes it from works of Visigothic art. However, without doubt, that which most attracts attention to this church is the pictorial decoration, with aniconic frescoes (stucco, very well executed), painted in three layers, with architectural decoration that bears clear Roman influences. Although it appears more a monastic rather than a royal church, a gallery was reserved for the king in the transept. Of the three original entrances to the church, two have been filled in.

The only sculptural decoration that has survived to the present day is that of the marble capitals on which rest the semi-circular arches. There are also two marble flagstones with hexagonal geometric figures and floral motives that are found in the central chapel. The pictorial decoration is the most important element that can be seen in the church. It is without doubt the most important of its time, in its extent and conservation as much as in the variety of icons represented, in all of Western Europe.
Image by Jaume Meneses on Wikimedia under Creative Commons License.
Sight description based on wikipedia