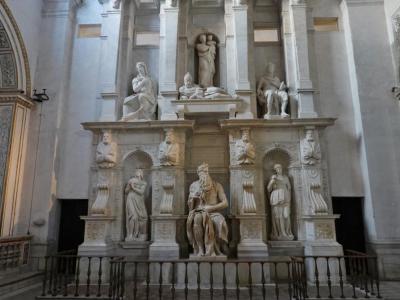 The church of San Pietro in Vincoli ('St Peter in Chains') is to be found on the square of the same name and is one of Rome’s many minor basilicas. In 432 AD, a small church was built to house the relics of the chains that the Apostle wore while he was imprisoned in Jerusalem. According to the Acts of the Apostles, the Lord sent an angel who caused the chains binding Peter to fall and then the angel led him from his prison without waking the sleeping guards. Today, the chains are kept in a reliquary under the main altar.

The basilica was constructed around this shrine in 439 by Pope Sixtus II. The building was restored several times over the centuries: by Pope Adrian I in 790, again in the 11th century, and once more in the 18th century by Fontana, with the coffered ceiling and its central fresco depicting the “Miracle of the Chains” executed by Parodi. You can admire two paintings by Guercino (one of St Augustine and the other of St Margaret), and the monument of Cardinal Girolamo Agucchi by Domenichino, who also painted the fresco of the “Liberation of St Peter” in the sacristy.

The item that makes this church one of the most visited minor basilicas in Rome is the magnificent statue “Moses”, sculpted by Michelangelo in around 1505. It was commissioned by Pope Julius II, who intended it to be part of his funerary monument, along with various other religious figures. Unfortunately for the syphilitic pope, the master artist was occupied with repainting the Sistine Chapel and the monumental tomb was never realized. San Pietro in Vincoli inherited “Moses” and Pope Julius II was buried in St Peter’s Basilica.

Why You Should Visit:
Understated exterior, incredible interior; a Michelangelo must-see.