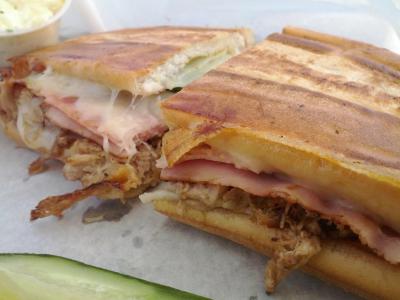 Sanguich de Miami on Calle Ocho, arguably Miami’s top destination for Cuban sandwich, is a quaint counter-service restaurant that has been on Florida’s culinary scene since 2017 offering a choice of classic Cuban sandwiches and made-to-order batidos (Cuban milkshakes).

Initially housed in a shipping container in Little Havana, the now 750-square-foot restaurant boasts its own ventanita along with indoor seating for 25 people. Inspired by Cuba’s early 1900s Spanish architecture, the venue features brass trimmings with floating tables inlaid with brass and quartz, Cuban tiles throughout and the decorative walls adorned with reeded molding.

All ingredients at Sanguich de Miami, from cured ham and brined pork to artisanal mustard and fresh pickles, are prepped and cooked in-house. The crusty Cuban bread is the only item they take from outside, but it is also made specifically to Sanguich's own recipe in a Homestead bakery.

The local menu has been unchanged since day one, offering a lineup of six sanguiches (sandwiches) including the “Cubano,” pan con lechon, and pan con croqueta, along with plantain fries served with up to five variations of mojo sauce, as well as Cuban nachos, and a rotating selection of seven “batidos” with flavors like trigo, mamey, banana, guava and cream cheese. Among the house highlights are medianoches, pan con bistec (made with slow cooked and thinly sliced top round steak, mojo rojo, and fried string potatoes with fontina cheese on Cuban bread), croqueta preparadas, and cream cheese-filled Elena Ruzes.

Why You Should Visit:
The best Cubano (classic Cuban sandwich) in Miami resides here.
Image by Ron Dollete on Flickr under Creative Commons License.