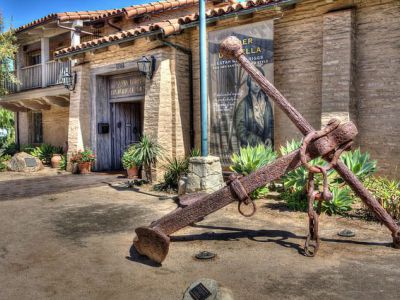 In October 1932 a voluntary association was formed consisting of representatives from a number of local organizations. This new association was the Santa Barbara Historical Society. Soon after its founding, the Society was offered the “tower” room in the Santa Barbara County Courthouse as an exhibition space. The Society’s growth necessitated a larger space than the courthouse tower room. Katherine Bagg Hastings offered her home and arranged to transfer ownership of the house to the Society upon her death. The Society would remain housed in the Old Mission for the next eleven years. In 1959 the Society acquired the Judge Charles Fernald Mansion. After a massive restoration project, Fernald House opened to the public as an historic home museum in 1962.

Want to visit this sight? Check out these Self-Guided Walking Tours in Santa Barbara. Alternatively, you can download the mobile app "GPSmyCity: Walks in 1K+ Cities" from iTunes App Store or Google Play. The app turns your mobile device to a personal tour guide and it works offline, so no data plan is needed when traveling abroad.

Ranking as one of the most attractive places on earth, by climate and geography alone, Santa Barbara also boasts a wealth of historic architecture tastefully and seamlessly accommodated into the city's modern day incarnation. To a first-time visitor to Santa Barbara, even the most cursory observation reveals the predominant role that these historic locations play in the identity and character...  view more

A popular weekend location and coastal city, Santa Barbara, has some of Southern California's top locations. Originating as a Spanish mission in 1782 and incorporated as a city in the state of California in 1850, the city enjoys great popularity for its beaches and beautiful architecture.

This city's name comes from the original Spanish mission's name, and the mission property...  view more

Santa Barbara has a variety of interesting museums, most of them situated in the downtown area of the city and in the harbor, the most important of which is Santa Barbara's Old Mission and Santa Barbara Museum of Art. Discover the Spanish heritage of America and the beauty and richness of local nature through this Museums self-guided walking tour.