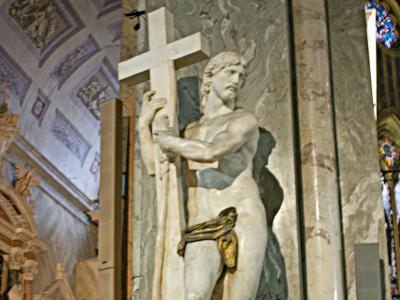 Situated just behind the Pantheon in Rome, the church of Santa Maria sopra Minerva, is more than just a temple but a true hidden gem packed full of art. The former Roman headquarters of the Dominican order, if there is only one thing in particular for which this church is worth visiting, it is the Michelangelo's statue Cristo della Minerva and the late 15th-century (1488–93) cycle of frescoes in the Carafa Chapel by Filippino Lippi.

Otherwise known as “Christ the Redeemer” or “Christ Carrying the Cross”, the marble sculpture by Michelangelo Buonarroti, to the left of the main altar, was finished in 1521. The work was commissioned in June 1514. Michelangelo worked on its first version around 1515, but abandoned it in a roughed-out condition upon the discovery of a black vein in the white marble.

A new version was hurriedly substituted in 1519-1520. Michelangelo entrusted the final touches to an apprentice, who, unfortunately, damaged the work. Despite that, the second version quite impressed the contemporaries, earning some of their most curious praises like “the [statue's] knees alone were worthy of more than the whole Rome”.

Originally, Christ was shown by Michelangelo unclothed in a standing pose. His sexual organs were exposed in order to demonstrate that his sexuality was uncorrupted by lust and completely controlled by his will, so that in his resurrected body he shows triumph over both sin and death. However, in 1546 a floating bronze loincloth was added, shielding the genitals from view.

Christ's leg is flexed and his head turned back, according to the principle of contrapposto. Compared to the first version, the more active pose allows more varied impressions when the statue is seen from different angles, "not only activating the space around him, but also suggesting an unfolding story".

While many other medieval churches in Rome have got Baroque makeovers, covering their Gothic features, the Minerva church has survived pretty much unscathed in its original guise, featuring several magnificent stained-glass roundels including that of Mary surrounded by saints – easily the best stained glass in all of Rome, and the ceiling painted deep blue with golden stars.