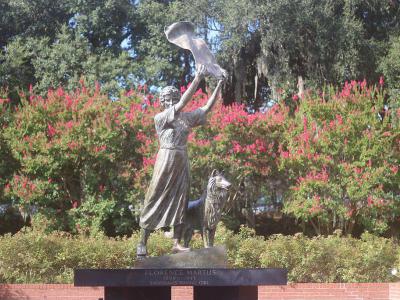 Savannah's Waving Girl has been the source of legend for ages. Living in a lighthouse, she would by day wave a handkerchief and by night a lantern to every passing ship entering or leaving Savannah. As she did this religiously for over 50 years, she became a living legend as all sailors watched to be greeted by her. Most of her admirers never knew her real name, Florence Martus, and called her the Waving Girl.

Martus waved hello and goodbye to the ships passing by her home from 1886 to 1931. Nobody knew why she did it, but conjecture was rampant – one of the favorite myths about the Waving Girl is that she'd fallen in love with a sailor in the 1890s. Promising she'd be the first to greet him, she began waving at every ship. When he never returned, she continued waving in the hopes that one of the entering ships would have him aboard. Waving wasn't all Martus did, though – in 1893, she and her brother risked their lives to save several men from a sinking ship using nothing but a flat-bottomed rowboat.

Now, a bronze statue of Florence Martus sits on the waterfront. It was designed by famous sculptor Felix de Weldon, the creator of the equally famous Marine Corps War Memorial showing the flag raising on Iwo Jima. It was erected in 1972 at Riverside Park and depicts Florence waving her kerchief, and her pet collie by her side. The little park is a great place to sit and watch the barges and boats go by.

Tip:
There are plenty of other statues around the riverfront that are also worth taking the time to enjoy.
Image by Jami430 on Wikimedia under Creative Commons License.