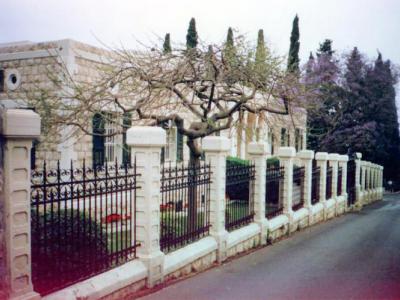 The second Western Pilgrim House, often referred to as "the old western Pilgrim House", located at 10 Haparsim (Persian) Street, was used by pilgrims during the first half of the 20th Century. It is currently part of the Bahá'í World Centre, and is used by the Bahá'í International Community Secretariat and related offices. The house was originally paid for by William Harry Randall, a wealthy American Bahá'í, who felt the facilities of the previous Western Pilgrim House at 4 Haparsim were inadequate. Its construction was started under the instruction of `Abdu'l-Bahá, but was only completed during the time of Shoghi Effendi as Guardian of the Bahá'í Faith.
Image Courtesy of Wikimedia and Jeff3000.
Sight description based on Wikipedia.