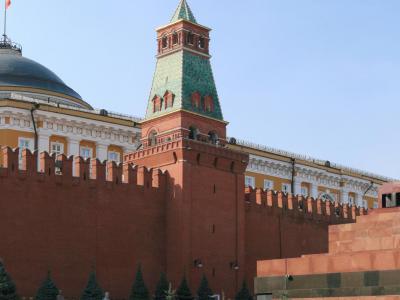 Right behind Lenin's Mausoleum, set between the Spasskaya and Nikolskaya towers, is another tower, called Senatskaya (Russian: Senatskaya Bashnya). Gateless and windowless and quadrangular in shape, it was built in 1491 by architect Pietro Antonio Solari, and was purely defensive in nature – designed to protect the Kremlin on the side of Red Square.

The interstitial tower remained nameless until 1787, when architect Matvei Kazakov erected the Kremlin Senate within the citadel. It was only then that the tower received its current name after the Senate, whose round dome is well seen behind the tower, when looked at from Red Square.

As with most of the Kremlin towers, in 1860 the Senatskaya was topped with a stone tent roof, crowned with the gilded weather vane, reaching the total height of 34.3 metres (113 ft).

Inside the tower there are three tiers of vaulted chambers and a through-passage for VIPs allowing travel between the Kremlin and Red Square.

A memorial plate by sculptor S. Konenkov was mounted on the Senatskaya Tower in 1918 above the site of a mass grave of Bolsheviks killed during the October Revolution. Now in the museum, that dedication reads "To Those Who fell in the Struggle for Peace and the Brotherhood of Nations". Added to the memorial tomb was Lenin's Mausoleum in 1930, built in front of the tower, thus making it an ever more important element of the Red Square ensemble.
Image by Ludvig14 on Wikimedia under Creative Commons License.
Sight description based on wikipedia