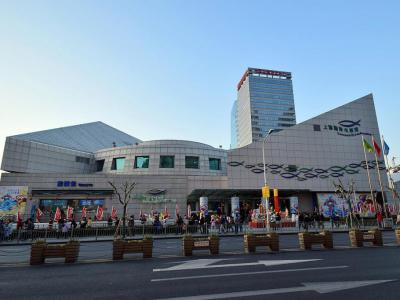 The Shanghai Ocean Aquarium is a spacious Public aquarium with one of the largest underwater tunnels in the world. It showcases fish and sea creatures from around the globe and aims to educate the public on the need to protect and preserve the living wealth of the earth’s seas and oceans.

The aquarium was opened for public viewing in 2002. It occupies an area of 20,500 sq meters and has more than 450 species from all five continents and four oceans. The species are grouped in thematic zones.

Notable species include a 17-inch long Oranda Goldfish named after Bruce Lee, aquatic animals and fish from the Yangtze River like the giant salamander and Chinese sturgeon, unique species from the Amazon and the rivers of Africa, South East Asian species, deep-sea fishes, sharks, jellyfish, sea dragons and electric eels.

Visitors walk through a hundred-meter tunnel surrounded by glass walls to view the vast array of exhibits in the Shanghai Ocean Aquarium. It receives over one million visitors every year from China and all over the world.

Tip:
Weekends and holidays will be a bit crazy, so it is recommended that you visit during the working week.