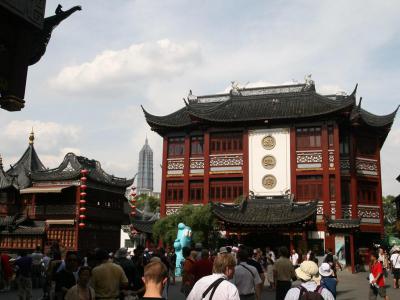 Traditionally, any notable city in China with a sense of history has a temple to its patron deity placed in the old quarter. The Ming-era Taoist temple in the Yuyuan Gardens serves this purpose for Shanghai and deserves a visit if you are in the vicinity, especially given the scarcity of old-style buildings in this part of the city.

Until 1950, this was the center of what is sometimes referred to as "popular Taoism", which is quite removed from the philosophical Taoism of the Tao Te Ching teaching by Lao Tzu. However, the new communist government was equally unsympathetic to any form of Taoism, and promptly removed from the temple all the statues allegedly supporting religious superstition.

Apparently, that reformation still wasn't enough and during the Cultural Revolution the temple was fully converted to a secular use with the main hall housing a jewelry shop for many years afterwards. The return of the traditional Chinese culture to political respectability saw the temple back in the hands of Taoist priests and reconsecrated in 2006.

Inside the temple, passing through its medium-size main courtyard, in front of the main gate, opens way to a number of halls, including the Huo Guang Hall, on the north side, with a large statue of Huo Guang, the prime of Shanghai's three City Gods. Going round the back of the hall one can see a short corridor leading to the hall of Qin Yu-Bo, Shanghai's second major deity. Around that are additional small halls featuring, among others, the Gods of Wealth, Literature, and Knowledge. Few more gods can be seen in the other halls around the main courtyard.

The area outside the temple is packed with souvenir shops selling everything, from postcards to key-chains to handicrafts to clothing, plus many other stores to choose from, mixed up with the beautiful modern but traditionally-styled buildings housing food courts and restaurants offering a wealth of regional cuisine.

At night, when they are lit up, or even during daytime, these old-style buildings are great for taking memorable photos contrasting the Bund's high-rises in the background.