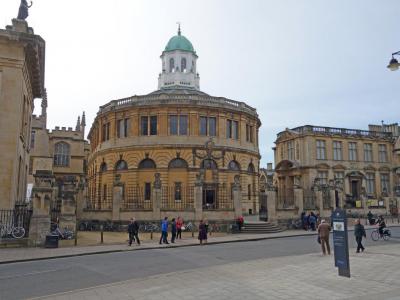 Although Oxford University was founded by various clergymen and, at first, the colleges were for learning theology, it didn’t remain that way for long and some of the buildings were put up for other purposes than study. The Sheldonian Theatre is one of those buildings.

For many centuries, graduation ceremonies were held at St Mary the Virgin on High Church. These ceremonies usually ended up as boisterous parties, not much in keeping with the spiritual surroundings. This offended the church’s ministers to the point that in 1660 they appealed to the University’s Chancellor, Gilbert Sheldon, to help them build a place for the ceremonies. Sheldon, who later became the Archbishop of Canterbury, not only agreed to the idea, but funded the building himself.

The theater was designed by Sir Christopher Wren, who turned his back on the popular Gothic style and based his plans on the 1st century BC Theatre of Marcellus in Rome. The only problem was that the D-shaped building was too wide for the supporting roof beams, so Wren used a geometrical grid pattern, invented by John Wallis in 1648, which consisted of a lattice work of timber trusses and crossbeams without any supporting pillars. The roof was rebuilt by George Saunders in 1802.

On the ceiling, 32 oil-on-canvas panels make up a wonderful fresco that relates the story of Truth, Arts and Sciences kicking Ignorance out of the University. Apart from graduation ceremonies, today the theater is used for other events too, such as conferences, lectures and music recitals.

There is an 8-sided lantern on the center of the roof with windows on all sides, which affords great views of the city and is open to the public.
Image by Tejvan Pettinger on Flickr under Creative Commons License.
Sight description based on wikipedia