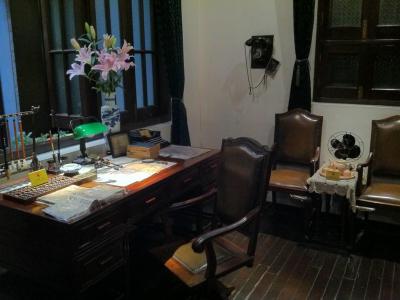 The Shikumen Open House Museum recreates the interior of an authentic "stone-gate" house in Shanghai when the city was known as “Paris of the East.” The carefully restored building is fascinating to wander around, skillfully evoking the life of early 20th-century Chinese gentility before the communist era.

The “shikumen” style housing was typical and unique of Shanghai's middle class back in the 1920s and 30s. At the time, there were nearly 9,000 shikumen houses in the city, with most of Shanghai's elderly population having been born there.

The house-museum has eight well-appointed exhibition rooms stretched over three floors: the living room, the study room, the master bedroom, the daughter's room, the son's room, the kitchen, the grandparents' room and the prayer room, each containing pertinent everyday objects of the era: from children's books and toys, to typewriters, kitchenware, furniture, toiletries and the like. A top-floor display details how the surrounding Xintiandi neighborhood came about, admitting that most of it was built from scratch.

Paved and pedestrianized, with the old alleys opening out onto the central plaza, Xintiandi is a great place to wind down or linger over a coffee after a visit to the museum, surrounded by upscale restaurants and shops, and with plenty of outside seating for people watching.
Image by Banalities on Flickr under Creative Commons License.