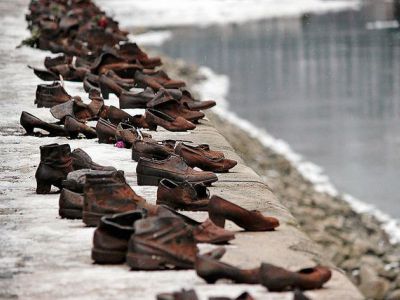 Shoes on the Danube Bank, Budapest (must see)

Located on the east (Pest) side of the Danube Promenade in Budapest, the Shoes on the Danube Bank memorial was erected on April 16 2005. It was conceived by film director, Can Togay, together with sculptor, Gyula Pauer, to honour the victims of the fascist Arrow Cross terror in Budapest during World War II.

The composition gives remembrance to the 3,500 people, 800 of them Jews, who were shot by the Arrow Cross militiamen. It represents the shoes left behind on the bank, as the victims were ordered to take their shoes off prior to being shot at the edge of the water so that their bodies fell into the river and were carried away.

The sculptor created sixty pairs of period-appropriate shoes out of iron, attached to the stone embankment, accompanied with the cast iron signs, reading in Hungarian, English, and Hebrew the following words: "To the memory of the victims shot into the Danube by Arrow Cross militiamen in 1944–45. Erected 16 April 2005."

Most of the murders along the river took place around December 1944 and January 1945, when the members of the Arrow Cross Party police ("Nyilas") took as many as 20,000 Jews from the newly established Budapest ghetto and executed them along the river bank.
Image by Albert Lugosi on Flickr under Creative Commons License.
Sight description based on wikipedia