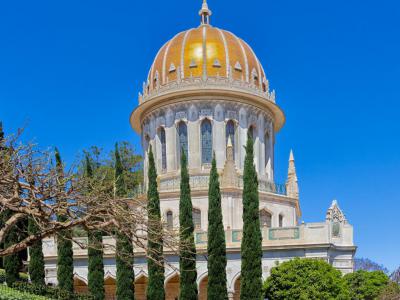 Shrine of the Báb, Haifa (must see)

The Shrine of the Báb is the site where the Báb's remains are laid to rest. The location was designated by Bahá'u'lláh himself in 1891 while he was camped, with `Abdu'l-Bahá, across from Mount Carmel. The site is right above the German Colony, which was established in the 1860s by the German Templar Society. Built by `Abdu'l-Bahá in 1909, the shrine’s superstructure was not completed until many years later by Shoghi Effendi and was finally dedicated in 1953. The architect was William Sutherland Maxwell, a Canadian Bahá'í who was a Beaux-Arts architect and the father-in-law of Shoghi Effendi. Some aspects of the dome's structural engineering were designed by Professor H. Neumann of Haifa's Technion University.

Tip:
You are not allowed to climb the steps back up, so keep in mind that at the end of your time here you can exit and a walk or taxi to your next destination.
Image Courtesy of Wikimedia and Tom Habibi 1734.
Sight description based on Wikipedia.