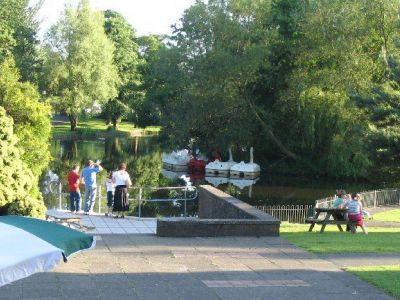 Singleton Park is the largest urban park. The park has hosted many entertainment and cultural events such as Party in the Park and Proms in the Park which were regular events by local stations The Wave & Swansea Sound and other music events held by the two stations and their partners are Escape into the Park and the former Stars in the Park.

A botanical garden is located in the centre of the park near the entrance to Swansea University. On the south-western corner, past the hospital and the university, there is a boating lake with pedal boats available. The lakeside pub, Inn on the Lake, became so well-known as The Pub On the Pond that the owner later gave in and changed the name.

The park was originally part of the Vivian family estate, which was purchased by Swansea County Borough Council in 1919 for use as a public park. The park superintendent Daniel Bliss, who was trained at Kew Gardens was responsible for the conception of the Singleton Farm botanical gardens and Ornamental Gardens. He was also the main driver behind the purchase of the Vivian estate.