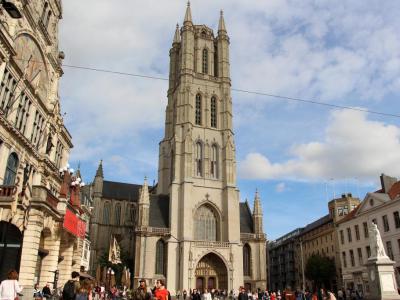 In 1566 the Calvanist iconoclasts were on a rampage in the Netherlands. Raiding churches, they found a target rich environment. Stained glass windows, statues, artwork, everything had to go. Three days before they got to St. Bavo's, artwork was hidden in the crypt and St. Bavo's was mostly spared.

St. Bavo's Cathedral or Saint-Baafskathedraal, is a 292 foot tall Catholic cathedral in Ghent. It is built on the site of the wooden Chapel of Saint John the Baptist, founded in 942 by Transmanus, Bishop of Tournai and Noyon. Construction of a new Romanesque church began there in 1150.

In the 14th through the 16th centuries ambitious Gothic renovations were added. On top of the lower Romanesque church a high Gothic choir and an enormous vault with tall windows was built. Around the choir is an ambulatory and 14 chapels. The 292 foot tower was erected in 1534. The church became a cathedral in 1569. A new nave was added by 1590.

Among the treasures that were saved from the iconoclasts of 1566 is the Famous Ghent Altarpiece, a painted polyptych by the van Eyck brothers Jan and Hubert in 1432.

Other artists represented in the cathedral are Peter Paul Rubens and Lucas de Heere. Frans Pourbus the Elder created 14 panels of The History of Saint Andrew (1572). There are three paintings by Caspar de Crayer, including The Beheading of John the Baptist. Eleven grisailles of the Old and New Testaments adorn the choir above the stalls.

The high choir is an awesome part of the interior. It has stalls for members of the Chapter of Saint-Bavon. The Baroque High Altar, installed from 1702 to 1782, is made with black, white and red flamed marble. In the nave is a rococo pulpit from 1745.

In the crypt are reliquaries and collections of liturgical ornaments and vessels. Virtual tours of the crypt, including the altarpiece, are available. There is a basic tour and an advanced tour of at least ninety minutes. Do not miss the painting of the Mystic Lamb.
Image Courtesy of Flickr and Fred Romero.