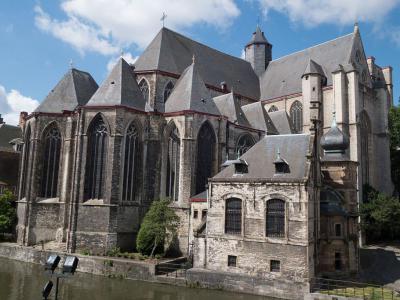 Sint-Michielskerk (Saint Michael's Church) is a Roman Catholic temple in Ghent. Documents attesting to the existence of a chapel dedicated to St. Michael on this site date from 1105. That building was twice destroyed by fire in the 12th century and rebuilt.

Construction of the current, late-Gothic church was commenced circa 1440, and was done in two phases, separated by a long interval. During the first phase, in the 15th-16th centuries, the western part, including three-aisled nave and the transept, was completed by 1528. Construction of the western tower continued and by 1566 two levels of it had been finished. Then, due to religious conflicts, the construction had stopped and looting and destruction followed. Part of the church was destroyed in 1578 by Calvinists and in 1579 the old choir was demolished.

It wasn't until 1623 that the church's construction resumed. The Baroque style sacristy in the north-east was built in 1650-1651. Local architect Lieven Cruyl made a design for the unfinished western tower in 1662, which again wasn't materialized for a number of reasons. The tower was finally covered with a flat roof only in 1828.

The church has a rich Neo-Gothic interior, including an altar and a pulpit. Inside there are various 18th century statues, plus a number of Baroque paintings, including “Christ Dying on the Cross” by Anthony van Dyck, “Resurrection of Lazarus” by Otto Venius, and many others.

There is also a collection of silver and gold artifacts. Among them are the relic of St Dorothea in silver; the sacred "Doorn" donated by Mary, Queen of Scots; and the true Cross – a gift from the Archduke Albrecht and Isabella made in 1619.
Image Courtesy of Wikimedia and Thomas Quine.
Sight description based on Wikipedia.