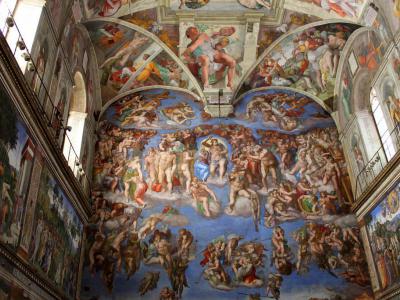 Sistine Chapel is the best-known chapel in the Apostolic Palace, the official residence of the Pope in Vatican City. It is famous for its architecture, evocative of Solomon's Temple of the Old Testament, and its decoration which has been frescoed throughout by the greatest Renaissance artists including Michelangelo, Raphael, Bernini, and Sandro Botticelli.

Under the patronage of Pope Julius II, Michelangelo painted the chapel ceiling between 1508 and 1512. He resented the commission and believed his work only served the Pope's need for grandeur. However, today the ceiling, and especially 'The Last Judgement', are widely believed to be Michelangelo's crowning achievements in painting.

The chapel takes its name from Pope Sixtus IV, who restored the old Cappella Magna between 1477 and 1480. Since the time of Sixtus IV, the chapel has served as a place of both religious and functionary papal activity. Today it is the site of the Papal conclave, the process by which a new Pope is selected.

Why You Should Visit:
Extraordinary paintwork; a highlight of Vatican City.

Tip:
Find a seat along the walls so you can admire everything without breaking your neck.
If you have difficulty in understanding the paintings it is worth visiting the gardens where huge boards explain them.