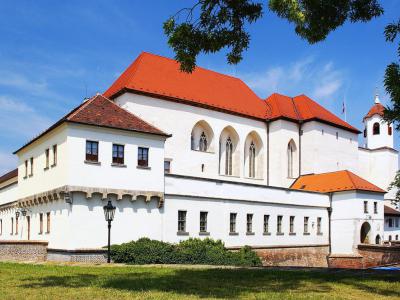 Špilberk Castle is an old castle on the hilltop in Brno, Southern Moravia. It began to be built as early as the first half of the 13th century by the Přemyslid kings and complete by King Ottokar II of Bohemia. From a major royal castle established around the mid-13th century, and the seat of the Moravian margraves in the mid-14th century, it was gradually turned into a huge baroque fortress considered the heaviest prison in the Austro-Hungarian empire, and then into barracks. This prison had always been part of the Špilberk fortress.

Špilberk entered public consciousness as a centre of tribulation and oppression on two more occasions; firstly, during the First World War when, together with military prisoners, civilian objectors to the Austro-Hungarian regime were imprisoned here, and secondly in the first year of the Nazi occupation of Czechoslovakia. The Czechoslovak army left Špilberk in 1959, putting to a definite end its military era. The following year, Špilberk became the seat of the Brno City Museum.
Image by Pavel Ševela on Wikimedia under Creative Commons License.
Sight description based on wikipedia