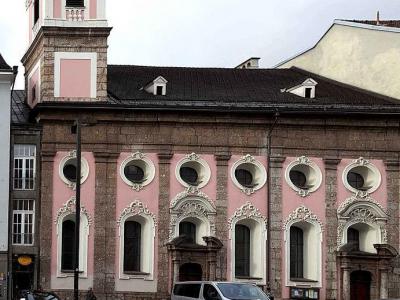 Spitalskirche is another old church, located in the center of town. Spitalskirche, or as it's also called Alte Spitalskirche zum Hl. Geist, is a Roman- Catholic Church of the Holy Spirit Hospital. Basilica dates back to the 14th century, where in 1326, the building was transformed into a hospital while also serving as a church.

The church was built from 1700 according to plans by Johann Martin Gumpp the Elder in place of a previous Gothic building. The two portals have intricately carved doors, the interior is characterized by rich stucco. The frescoes were repainted by Hans Andre in 1962 after being damaged by bombs in World War II. On the left side altar there is a crucifix from the 16th century.

Since October 2018 the hospital church has served as the “City Church”.
Image Courtesy of Wikimedia and Burkhard Mücke.
Sight description based on Wikipedia.