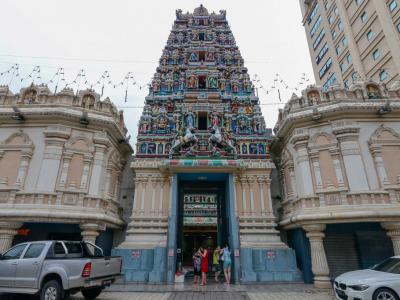 Kuala Lumpur in itself is a culmination of brewing together different cultures and people. The resultant of this rich blend of ideas, philosophies and heritage coming from different cultures and parts of the world is what makes it a fascinating place to visit and a tourist’s paradise. One such architectural example is the Sri Mahamariamman Temple.

Built in 1873, this enchanting temple is the oldest functioning Hindu Temple in Malaysia. Founded by K. Thamboosamy Pillai, a pre-independence Tamil settler and one of the most prominent figures in the Tamil community in the country, the Temple was initially used exclusively by the Pillai family. It was not until 1920s that they opened the doors so that it could become a place of worship for the immigrants from India.

One of the most striking features of the Sri Mahamariamman is its dramatic tower filled with intricate sculptures of the various Hindu deities – a whopping 228 idols. Known as the ‘gopuram’, the tower is dedicated to the deity Mariamman, protector of all those in distant lands to preserve them from the evils of the world. This temple is especially relevant because the procession at Thaipusam (Hindu festival) during the month of February starts from here.

Tip:
Entry is free, but ladies need to cover properly and shoes must be removed and stored on the side for a small fee (bring wet wipes for your feet to avoid getting socks dirty). Friday afternoon prayer time is an exciting experience; watching the ritual, and all the music to go with it.