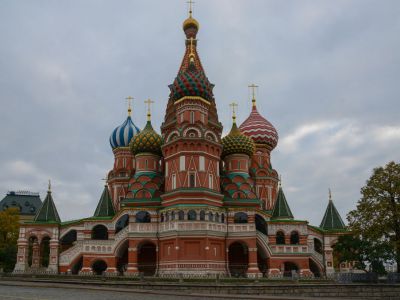 A true symbol of Moscow, the Cathedral of Saint Basil the Blessed is one of the most recognizable landmarks in Russia. Situated next to the Kremlin, its symmetry and brilliant colors are an immediate eye-catcher when visiting Red Square. The cathedral was built on order from Tsar Ivan the Terrible between 1555 and 1561 to celebrate the conquest of the Kazan Khanate.

St. Basil’s design has no parallel in the Russian architecture. It's very much mosque-like, reflecting influence of the Kazan region, and represents a perfect blend of the eastern and western traditions.

Originally, the building was known as Trinity Church and later Cathedral. It featured eight chapels representing the eight battles of Kazan, arranged around a ninth, with the central chapel dedicated to the Intercession. Each chapel is named after a saint and is interconnected with each other via passages. The tenth chapel – over the grave of the venerated local saint Vasily (Basil) – was added in 1588.

Throughout its more than 450-year history, the cathedral has survived several fires, invasion of Napoleonic army and even found itself on the verge of demolition under Joseph Stalin, who thought it might obstruct military parades on Red Square.

Among other highlights of the cathedral are a garden, 400+ icons from the 16th-19th centuries, and a 19th-century portrait of Saint Basil. The onion-style, ten-dome ensemble creates the image of a bonfire flame rising into the sky.

Today, this picturesque ex-house of worship acts as a museum. Also, once a year it hosts the annual Day of Intercession service.

Why You Should Visit:
A true gem of architecture and history, ideal for photo geeks. Pictures taken during daytime or at night are equally impressive.
The colorful exterior is matched by the multi-chapel interior filled with numerous well-kept paintings and wooden carvings.
Oftentimes, small choirs are on hand during the day to showcase the building’s superb acoustics.

Tip:
A new expansive park behind St. Basil’s, along the river, offers stunning views and camera angles for the cathedral.
Make sure to check if the tours are on – schedules vary randomly during the week.