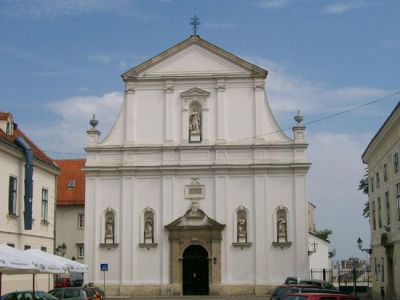 The Church of St Catherine is the first Baroque church in Zagreb, located in the square of the same name. Before the St. Catherine's was built, a 14th-century Dominican church occupied the area. When the Jesuits arrived in Zagreb in the early 17th century, they thought the original church too rundown and inadequate, and worked to build a new church. Construction began in 1620 and was completed in 1632. A monastery was built adjacent to the church, but now the spot is home to the Klovićevi dvori art gallery. St. Catherine's church was victim to fire twice in history: once in 1645 and again in 1674, devastating the interior. The church was refurnished with help from wealthy Croatian nobles, and in return, they were allowed to display their family coat-of-arms or have the honour to be buried or entombed in the church. Inside the church there are some Baroque-style sculptures and paintings. The building has sustained damage throughout centuries, caused primarily by earthquakes; its exterior has largely remained intact, though. Near the church is located a gymnasium and a monastery that has now been transformed into a museum.
Image by Suradnik13 on Wikimedia under Creative Commons License.
Sight description based on wikipedia