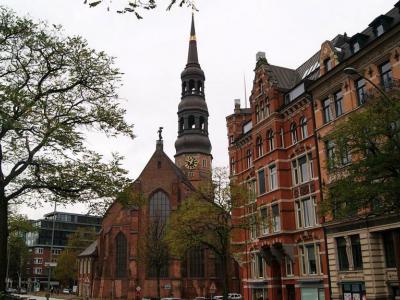 St. Catherine's Church is one of the five principal Lutheran churches in Hamburg, Germany. The base of its spire, dating back to the 13th century, is the oldest building preserved in the city, after the lighthouse on Neuwerk island. It is situated on an island near what was formerly the southern boundary of the medieval city, opposite the historic harbor area on the Elbe river. It traditionally served as the church of the seamen. The earliest attestation to the existence of the church dates back to 1256. The main body, consisting of a triple nave, was rebuilt during the mid-15th century in the north German Brick Gothic style. In 1657, a Baroque rooftop was added to the spire, thus elevating its height to 115 meters. The church was heavily damaged in an air raid during World War II, on July 30, 1943. It left only the outer walls and the base of the spire standing. The building was restored between 1950 and 1957.
Image by Mogelzahn on Wikimedia under Creative Commons License.
Sight description based on wikipedia