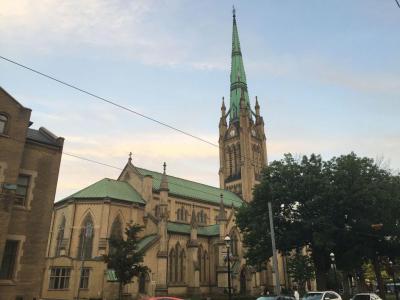 One of the most enthralling churches of Toronto is the St. James Cathedral. Not only does the facade of this church make it captivating, but it is also the story that accompanies it.

Home to the oldest congregation in Toronto, established in 1797, St. James's serves as the spiritual center of St. Lawrence neighborhood and is the episcopal seat of the Anglican Church of Canada's Diocese of Toronto. All of this makes it one of the most treasured heritage sites in the city.

Built in the mid-19th century, the cathedral boasts a magnificent Gothic Revival style of architecture. Designed by Frederick William Cumberland, the St. James Cathedral greets spectators from far and wide coming to admire its sheer beauty. The structure flaunts a wonderful harmony of proportions and grandeur. With its white brick and sandstone exterior, the building conspicuously stands out in contrast to its surrounding landscape. Along with its exteriors, the cathedral's insides are also equally breathtaking. The architectural elements include high raised ceiling, ribbed vaults and pointed arched lights that brighten the interiors with natural illumination, making it a truly magnificent sight to behold during daylight.
Image by Simonparis9 on Wikimedia under Creative Commons License.