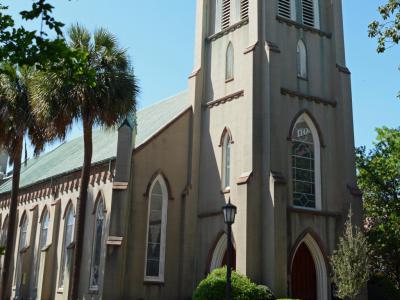 St. John's Episcopal Church was founded in 1841 in an attempt to increase the Episcopal presence in America. Its very first members were converts from the Anglican Christ Church, and its first rector was the notable Right Reverend Stephen Elliott.

The building itself was designed by architect Calvin Otis in a Neo Gothic style, and built between 1852 and 1853. It was created to have the look of a simple parish house, though it does have several very interesting features- a ships mast is in the center of the church's only spire, it has several magnificent stained glass windows, and its known for its melodious chimes.

St. John's stained glass windows are all circa the late 19th century. The church's north and south walls are bordered with a set of fourteen different windows depicting the life of Christ, including the Annunciation, Birth, Flight to Egypt, and Jesus in the Temple, to his Death and Resurrection.

St. John's Episcopal Church also owns the neighboring Green-Meldrim House. This historic house was occupied by General Sherman during the Civil War, and purchased after the war by Judge Peter Meldrim. Today, it serves as a historical building alongside the church itself, and is a setting for church activities like weddings and get-togethers.
Image by Bubba73 (Jud McCranie) on Wikimedia under Creative Commons License.