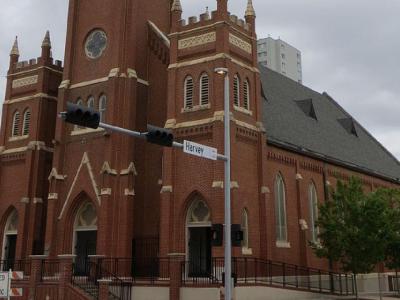 The church was constructed of Coffeyville brick in the Gothic Revival style. It features a central tower with a spire that is flanked by two shorter towers that are crenellated at the top. The building measures 137 by 64 feet.

St. Joseph's Old Cathedral was extensively damaged when a bomb exploded at the nearby Alfred P. Murrah Federal Building on April 19, 1995. Most of the stained glass windows on the east side of the church were shattered, and the pipe organ was extensively damaged. The explosion raised the roof several inches off its steel pillars and several of the rafters were broken. Plaster fell from the walls and ceiling and the painted, symbolic plaster medallions were destroyed.

The church was closed for nearly two years. A statue carved from Italian marble entitled And Jesus Wept was created to commemorate the event and is adjacent to the Oklahoma City National Memorial. It was dedicated in May 1997 and the church was rededicated on December 1 of the same year.
Image Courtesy of Wikimedia and Joel Bradshaw.
Sight description based on Wikipedia.