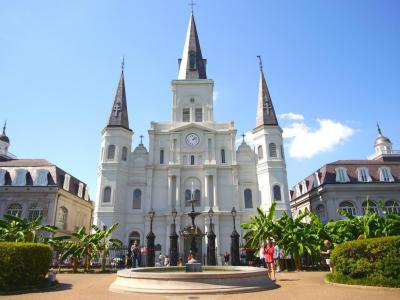 Most tourists recognize the St. Louis Cathedral's triple spires as the main symbol of the French Quarter. Many have taken photos of the gleaming white facade against a clear blue sky, from across picturesque Jackson Square. Relatively few, though, have stepped inside the Cathedral – the oldest continuously active one in the US – to view its surprising interior; the stained glass windows depicting the saintly life of France's King Louis IX, the glorious murals and statuary beckoning the visitor back nearly 300 years to its founding. The influence of both the Spanish and the French is easily recognized in both the artwork of the church and also the flags displayed near the chandeliers in the main aisle of the sanctuary.

Take a free tour for some fun facts (there doesn't seem to be a set schedule, but check with the office to see if they can give you an idea of a likely time) or just pick up one of the informative self-guides available in the vestibule for a $1 donation. The fine pipe organ is frequently played for the enjoyment of visitors (though, again with no set schedule) and there also is a small gift shop.

Why You Should Visit:
The church is awesome to see, but all the happenings that take place in front of it are also a treat. The stained glass is most representative of the best found in Catholic churches, but you don't have to be Catholic to take photos and look around.

Tip:
Note the sloping floor: Clever architectural design somehow keeps the building upright even as it continues to sink.