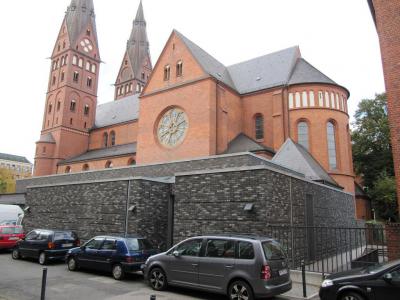 St. Mary’s Cathedral was the original Hamburg cathedral, serving this function in the city from 1035 to 1804. Known locally as Hamburger Dom, it was twinned with the cathedral in Bremen, another important city state in what is now Northern Germany. One of the first places of worship built in Hamburg, St. Mary’s Cathedral was located between the rivers of Alster and Elbe, close to Speersort Straße.

The cathedral survived for over 750 years in the city, through the Reformation period in Germany, largely due to its ownership by the Duchy of Bremen, which prevented the increasingly protestant city of Hamburg from closing it. When the Duchy of Bremen ceded the cathedral in 1803, a decision was made to demolish it. Some believe that this was in keeping with Hamburg Senate’s prioritization of mercantile interests throughout the 19th century. Others feel that it was down to the strong anti-Catholic sentiment in the city following the Reformation.

The location in modern Hamburg is marked by a park, just south of St. Peter’s Church. Steel blocks mark the former walls of the early cathedral, whilst 39 white benches indicate the former columns of the nave. One column foundation can be seen through a glass paving stone. The park is intersected by Domstraße, a pedestrian street named after the former cathedral. St. Mary’s Church in the Sankt Georg quarter, built in 1893, became the new Hamburg Cathedral in 1994.
Image by Lorenz Teschner on Wikimedia under Creative Commons License.