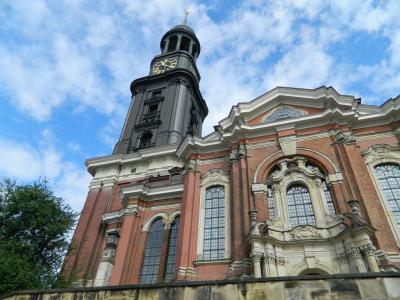 St Michaelis Church is located in the Neustadt quarter, on the banks of the River Elbe. Its distinctive 132m high Baroque copper spire is a landfall marker for ships approaching the Port of Hamburg, and is one of the city’s most recognisable landmarks. The church, known locally as Michel, is arguably the most famous of Hamburg’s five Protestant churches. Its name derives from the archangel Michael; a large bronze statue in the church portal shows the archangel defeating the devil in battle. The church has its own cemetery, which houses the final resting places of composers Johann Mattheson and Carl Philipp Bach.

A central part of Hamburg life for nearly four centuries, St Michaelis Church has led a troubled existence. The first church on this site was built between 1647 and 1669. It was opened as the church for the new town area (known as Neustadt), which was built in 1625. The original church was struck by lightning in 1750, and completely destroyed. The current building was constructed in its place in 1786, designed by Johann Leonhard Prey and Ernst Sonnin. It was reconstructed twice in the 20th century, following a fire in 1906 and bomb damage during the Second World War. Now Hamburg’s largest church, it can hold 2500 worshippers. The spire has a lift fitted inside it, allowing access for all to one of the best views over Hamburg.
Image by Poom! on Flickr under Creative Commons License.