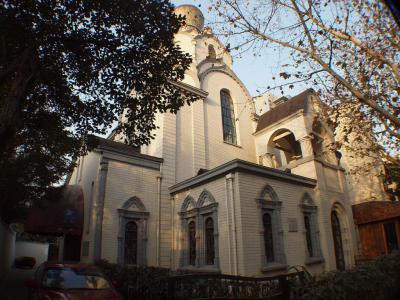 The St. Nicholas Russian Orthodox Church was the chief place of worship for the Russian Diaspora who fled to Shanghai from Vladivostok and flourished here between the two World Wars. Today, there is a revival of worship and services are held in the loft.

The Russian population in Shanghai consisted of refugees who fled their homeland after the Bolshevik Revolution. They established a small community called little Russia in the city. The St. Nicholas Russian Orthodox Church was built by the exiles at the former French Concession known as Rue Corneille. The location was later renamed as Gaolan Lu. The structure had the traditional onion shaped domes of orthodox churches of Russia. General Glebov, a prominent Russian exile, led the initiative to build a church for the Russian refugees. It was consecrated in 1937 in honor of St. Nicholas and the deposed Tsar Nicholas II.

The church was closed for worship when Europeans fled Shanghai after the Chinese Civil War. It was ransacked and damaged during the Cultural Revolution. The building was converted into a washing machine factory and later, a laundry. In 1994, the St. Nicholas Russian Orthodox Church was declared a city level cultural relic. The upper floor was leased by the government to a French restaurant called Ashanti and the lower floor houses a Spanish restaurant. During the 2010 Shanghai Expo, the loft of the church was re-consecrated. From May 2010, weekly divine services have been held for visiting Russian Orthodox worshipers.
Image by meckleychina on Flickr under Creative Commons License.
Sight description based on wikipedia