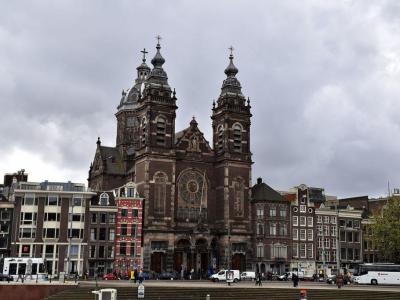 One of the most inspiring structures in Amsterdam is the St Nicolaaskerk (St Nicolas Church). A unique amalgamation of Neo-Baroque, Neo-Renaissance and traditional Dutch architecture, the Church of Saint Nicolas, built in the late 19th century, is one of the most splendid structures and best designed churches in modern day Amsterdam.

This overpowering temple was designed by architect A.C. Bleijs, who built it with a vision of reviving different styles of architecture. The chief patron of the Church – St. Nicolas, commonly known as Santa Claus, is also Amsterdam’s patron saint. The St Nicolaaskerk is still one of the main churches in the city that practice Roman Catholicism and services here are held regularly even today. Along with masses, the church is also known for its choir and musical recitals. People from all over visit here to listen to the 19th century organ played during the service.

The overwhelming presence of the ornate octagonal dome with the identical towers by its side and the stained glass window that separate them are truly a feat of sheer architectural brilliance. Not only is the St. Nicholaaskerk magnificent on the outside, the interiors are also spellbinding. Decorated by one of the most gifted artists of the 19th century, Jan Dunselman, the church in its full right is a true delight to visit.
Image Courtesy of Wikimedia and Vasyatka1.
Sight description based on Wikipedia.