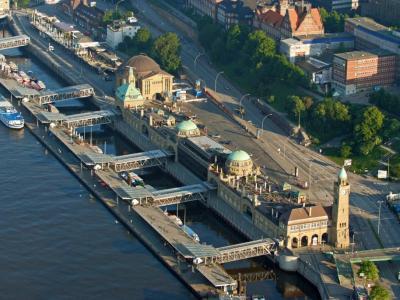 The Landungsbrücken, or Landing Bridges, are found on the northern banks of the River Elbe in St. Pauli, one of Hamburg’s 109 ‘quarters’. St. Pauli is an inner city area lying north west of Hamburg city centre. In addition to the Landungsbrücken, which are one of the city’s great landmarks, this bohemian district is known for the Reeperbahn, Hamburg’s gritty red light district, as well as St. Pauli FC, the famously left leaning football club. The Landing Bridges are a transport hub for the area, linking S-Bahn (trams) and U-Bahn (subway) services with river boats to the city centre and docklands.

The Landungsbrücken are a docking complex comprising several floating piers, connected by movable bridges. They were constructed to allow large steam ships to dock as close to the city centre as possible. The first pier was built in 1839, with the current layout, including the historic terminal building, completed by 1909. Bombing during World War II destroyed many of the original pontoons, which were replaced after the war. At the eastern end of the complex, the Pegelturm, or water level tower, has a tide indicator built into its wall. This distinctive feature was used to help guide steam ships into port along the River Elbe.
Image by Tilo 2007 on Flickr under Creative Commons License.