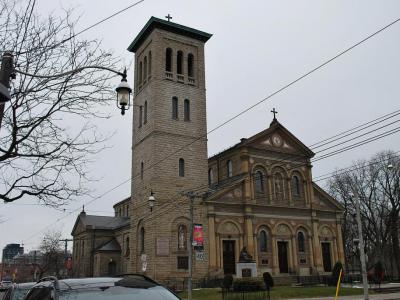 Tucked in the quiet neighborhood of Corktown is one of the most stunning churches in the urban landscape of Toronto. Housing the oldest Roman Catholic congregations in Toronto, the St. Paul’s Basilica is a must-see if you admire vintage architecture.

The present structure was built in 1889 and designed by Joseph Connolly, an architect of Irish- Canadian origin best known for his Gothic Revival churches. Connolly was quite a popular choice for Roman Catholic Churches and his designs were greatly inspired by George Ashlin and William Hague, who were then prominent Irish architects. However, the St. Paul’s Basilica was different from Connolly’s other designs. Where most of his churches were inspired by the Gothic style of architecture, the St. Paul’s Basilica models as a stunning example of an Italianate structure. With shades and glimpses of the Renaissance and Neo-classic elements of architecture, the Basilica seems very similar to the Basilica of St. Paul Outside the Walls in Rome.

The Basilica boasts a simple yet elegant facade in shades of stone and wood.

However, the true beauty of the structure lies within the church. With an elegantly painted ceiling and walls, elaborately painted stained windows and beautiful sculptures, the Basilica is the perfect example of a 19th century Roman Catholic Church.

Tip:
Don't forget to turn around and check out the organ up in the balcony loft – a beautiful instrument of praise!
Image by Enoch Leung on Wikimedia under Creative Commons License.