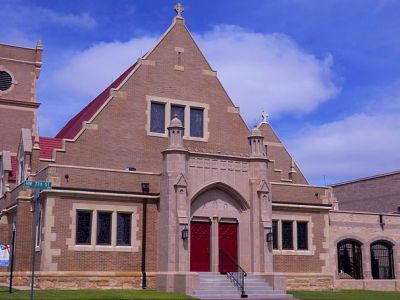 St. Paul's Cathedral is an historic church building located in Oklahoma City. It is the seat of the Episcopal Diocese of Oklahoma and it has been listed on the National Register of Historic Places since 1977.

St. Paul's began as a mission in 1891. The congregation met in several locations including the federal courthouse. The first frame building for the congregation was built in 1893 and the mission was raised to parish status on May 14, 1902. The cornerstone for the present church was laid in 1903 and the first service in the building was held on March 13, 1904. The parish house was opened the same year. The Diocese of Oklahoma elected in January 1909 to make St. Paul's its Cathedral.

Arthur J. Williams designed the church in the Norman Gothic style. The exterior features a Norman style tower. The interior has two Tiffany windows behind the altar. Stained glass windows on the Gospel side of the Church depict the Evangels: St. John, St. Paul and St. Luke. The windows on the Epistle side depict events from the life of Christ including the Nativity, Crucifixion and Resurrection. The altar, pulpit and the baptismal font are carved from Carrara marble.
Image Courtesy of Wikimedia and MisterBadmoon.
Sight description based on Wikipedia.