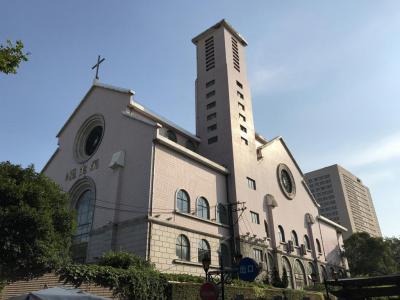 There are about 10 million Catholics in China, less than 1 percent of the population. St Peter's Catholic Church in downtown Shanghai is one of the country's few officially approved catholic shrines.

The original St Peter's Church was built in the 1930s by the French Jesuits for students of the Aurora University, a Jesuit-founded institution. When the Japanese attacked Shanghai during the Second Sino-Japanese War, the church sheltered many hundreds of refugees. Because of its International Settlement status, the building was spared during the fighting and remained under Catholic administration until after the Cultural Revolution, when the Jesuits were expelled and the old church became a cultural center.

Later on, the original church was razed to build a modern one in 1995, with very colorful stained-glass windows. Today it attracts a healthy crowd of foreigners and offers masses in English, French, German and Korean. English language mass is held on Saturdays at 5pm and Sundays at 11am.